If you’re a historical buff then Vidisha is the city for you. Filled with old temples and caves, this city gives us an insight and tells us the epic tale of the life and culture of its glorious past. Apart from temples and caves, this city has more to offer. You will also find a railway station named Vidisha which is on the Delhi-Chennai, Delhi- Mumbai main line of the Central railway, at a distance of about 56 kilometers from Bhopal which is the capital of Madhya Pradesh. 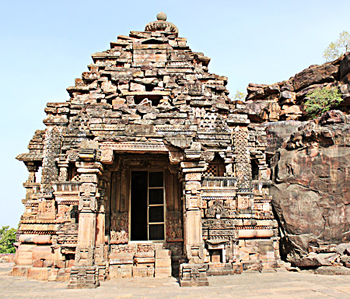 The temples at Vidisha are the most frequently visited by tourist. Their beauty and splendor not only attract people from the state but the whole of India. They gain major tourist attraction throughout the year. One of the most famous and prominent temples that you’ll find here is the Bijamandal or Vijayamandira Temple. This temple dates back to the eleventh century AD but it was demolished in the year A.D 1682 during the reign of the Mughal king Aurangzeb. Later this site was turned in a mosque. The mosque was erected on this site using the same material of the temple. The mosque came to be known as Alamgiri Masjid. The temple was said to be sacred to the goddess Charchika which was made known after an inscription was found carved on one of the pillars of the original temple. There are also inscriptions that record the king Naravarman. It is also said that the Goddess used to go by another name called Vijaya after which the temple is called Vijayamandira.

Another famous tourist attraction is the Bajramath temple. This temple certainly stands out from the rest. It showcases a very rare class of temples with shrines or cells placed side by side. Today, you will find Jain idols occupying this temple belonging to the Digambara sect. But the sculptures placed on the door frames and niches on the basement are indicators that the temple originally belonged and sheltered the Hindu trinity.

Udayeshwara Temple which is situated in Udaipur Village of the Basoda is another place to visit in Vidisha. The Gadarmal temple is located in Badoh- pathari of Kuwai tehsil. During the medieval times this town held tremendous importance. The Gadarmal temple towers in height and is one of the few temples that can be spotted from a far.

You can find the Sola-Kambi temple in the Badoh town of the Kurwai tehsil. The architecture is quite different with its flat roof, open and sixteen pillared building which is locally known as Sola Kambi. Another famous temple in this district is the Girdhari temple. This temple is known to be from the eleventh century A.D and known for its fine carvings and sculptures. You will also find other old and scared temples here like the Jatashankar and Mahamaya. Jatashankar is located at a distance of about 3 kilometers to the south west of Sironj in a forested area. It is also said that Tatya Tope stayed here for some time. The Mahamaya temple is situated at about 5 kilometers to the south west of Sironj. This temple is located on a hill and annually hosts a fair that attracts a lot of people.

Another major attraction is the idol of Chandranath. It is considered as the oldest monument the eight Jain tirthankar found at Dharampur near Sironj. The inscriptions date back to the Vikrama Samvat Era.


Other Tourist Spots in Vidisha 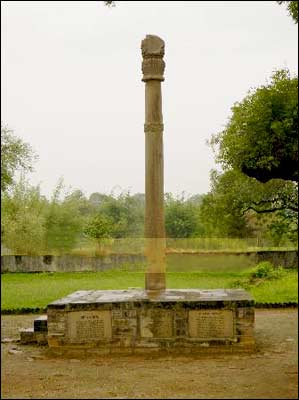 The Holiodorous Pillars are another famous attraction in the district of Vidisha. The pillar was erected by the personnel ambassador of Greek King of Antialcidas of Taxila. Heliodorous who represented Greek king in Sunga court erected the pillar. The inscription on the pillar has the name Garuda- Dhvaja, the column prevailed by Garuda was erected by Heliodorous honoring God Vasudeva in front of the temple of Vasudeva.

Shalbanjika is another famous attraction. It is an exquisite figure of Vrishaka which is dated back to the eighth and ninth century A.D and is kept in the archeological museum, Gwalior. This beauty represents a Shalbanjika.Vidisha is full of history and each place within this district tells a tale of the ones gone before us. It’s old architecture and stories attract people from all over to get a glance of these majestic pieces.

The Udaigiri caves are the other attractions that are drawing tourist to the district of Vidisha. Six kilometers from Vidisha and 3 kilometers from Sanchi you’ll find a group of rock cut cave sanctuaries. This site holds great archeological importance and lies between the Beas River and Betwa River. This site draws crowds of all ages for its ancient rock cut temples excavated in an isolated sandstone hill and the numerous Buddhist remains found in the surrounding areas. Some of these temples hold dated and updated inscription which is of grave importance. The formations of the caves are basically small chambers, preserving idols and images of the various dynasties that came into power carved into the rock of the hill. Through the caves and other remains found at the site, it is noted that these caves have passed through various influences like Jainism, Buddhism and Hinduism of those days.