Vidisha in Madhya Pradesh coordinates: 23.53°N latitude and 77.82°E longitude. It has an average elevation of 424 metres (1391 feet). Situated on the Eastern part of the fertile Malwa region, the Tropic of Cancer passes through the Southern part of the district. Vidisha is bounded by Raisen district in the South, Guna district in the North, Sagar district in the East. Owing to its proximity to the Bes and Betwa rivers, Vidisha was a prominent district for trade in erstwhile periods. With fertile black soil, rich vegetation and high mineral reserves, Vidisha is also very fertile.

The climate experienced in Vidisha may be classified into four seasons. Winter, from December to February, followed by the summer till mid June. Mid-June till September end is the monsoon and the months of October and November, the retreating monsoon. The city remains quite drenched during the monsoon months. The average annual rainfall in the district is 1299 m.m. 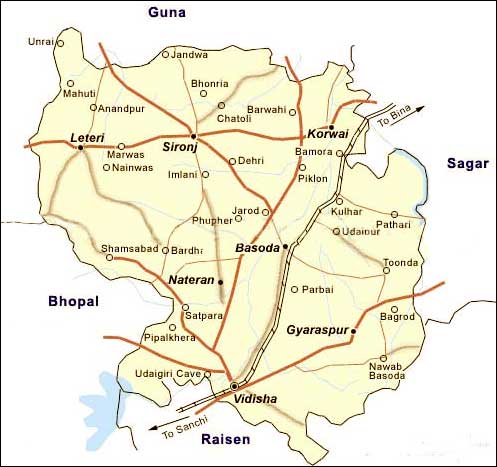 The best season to travel to Vidisha is during the winters, where both day and night offer cool and comfortable temperatures and is apt for visiting the places of interest. The months of September to March are therefore the best months to travel. There could be cold waves during some nights of December and January, taking the minimum temperature to slightly above the freezing point of water.

The district of Vidisha lies off the Vindhyachal Range, on the Vidhyachal Plateau with several spurs towards North and North-East. The city of Vidisha lies mainly in the valley of the Betwa River which flows from South to North and the valley is bordered by the Garhi-Teonda Range in the East and Ganiari-Raghogarh Range in the West. These ranges extend from South to North and form a part of the ranges of Vidhyachal on the Malwa plateau.

Almost seventy five percentage of the area of the district of Vidisha is covered with black cotton solid, occupied by Deccan Basalts. The balance twenty five percentage has red-yellow mixed soils derived from sandstone, shale. Alluvial soils are also found along the river courses. At the hilly areas, regions of relatively higher elevations, there are small rounded pieces of weathered trap. A thin layer of sandy loams covers the Vidhyans and Bijawars.

The Vidisha region has a total forest cover of 15% of the total geographical area. The prominent forest products of the district are Tendupatta, wood for construction and wood for fuel. The total forest area of 1,09,600 hectares is spread in 7 tehsils which are Gyaraspur, Vidisha, Nateran, Basoda,Sironj, Kurbai and Lateri.

The Vidisha district of Madhya Pradesh is situated east of the Betwa River, in the fork of the Betwa and Bes rivers. The three units of the district, namely Malwa Plateau, Vindhyan Hill and Alluvium plain are formed by the valleys of rivers like the Betwa basin and Sindh river. Over 80% of the district is located in the Betwa river basin, which is drained by its tributary like Keother nadi, Nion river, Bah nadi, Bina river and Kethan nadi.